I am a thrift store junkie. I remember when I was a kid, we didn’t have a lot of money. Every summer, my family spend a week in Auburn, WA at Lake Tapps. Auburn had tons of thrift stores and we’d go each year to pick up clothes for the school year. So, I wasn’t the most fashionable kid in the school, but I learned to love the adventure. That love for thrift stores persists today. I’d say about half my shoes and clothes come from thrift stores – a handful of handbags too! It used to be a necessity for money reasons, but today, I can afford new clothes. But I am used to thrift pricing now. ($100 for jeans?! HA!) And honestly, I just love the challenge and the hunt for a great deal.

Thrifting has become trendy recently. One of my favorite blog sites, Hello Giggles, has a whole series of posts about thrifting. The new CBS show 2 Broke Girls (which I find funny, but all my friends think it sucks) had a hilarious episode where the street-smart broke girl took the former rich-bitch broke girl to the Goodwill. Especially in today’s economy, and with increased sensibilities to ‘green living’, thrifting is a fantastic money-saving, reduce/reuse/recycle option. All it takes is some common sense and a sense of adventure. With a dash of patience. And hand sanitizer.

Clothes. This is the easiest category. I only own one pair of jeans that did not come from a thrift store. Most of my dresses (I have a lot!) are from thrift stores. You will need to try things on – especially jeans. I have to try on 15 pairs for every 2 I go home with. But I have some nice jeans – Hilfiger, DKNY – and not a single pair cost more than $9.99. I have found cute tops, great sweaters – never spending more than $15 for any item. Here are some of my faves:

END_OF_DOCUMENT_TOKEN_TO_BE_REPLACED

The past couple of weeks I have regaled you with stories of the more “manly” aspects of my life, in order to distract you from the fact that yes, I do watch that horrible girly monstrosity that is The Bachelor. I have yet to find something worthy of this week. I did watch the NFL playoff games this weekend and proudly cheered for my 49ers. However, I followed the games by watching Miss America and the Golden Globes. Both very non-manly shows. Manliness cancelled out. I painted my nails, I sewed a lacy decorative pillow that has no use whatsoever, and called my friend Stefeny to rescue me because of snow flurries. Completely non-manly. But let me remind you – a few weeks ago, I won my fantasy football league! Awesome! And last week, I caulked my bathroom! I am tough and independent and so not girly! But this week, it appears the only manly thing I will do is to remind you of all the awesome things I did in the past while having nothing new or impressive to show for myself. Now that’s manly. (too mean? nah!)

8:00pm – Oh, the pre-cap for the week. Blah. I do like the twist that with Ben in his town, he can talk to his sister about his experience. Nice to not have to wait til the end for that. Gives good perspective earlier.

8:06pm – Is it just me or does Emily look a little bit like Jenny McCarthy? Seems pretty normal and like a decent girl. Too bad Courtney can’t relate.

8:10pm – Climbing to the top of the Bay Bridge?! AWESOME! Where do they find these girls with no sense of adventure? Sissy!

END_OF_DOCUMENT_TOKEN_TO_BE_REPLACED

All day I debated whether or not I was going to watch The Bachelor tonight. As I said last week, this show really is dreadful. And Ben is really unattractive. I mean really unattractive. Buck teeth, face like a horse, hair like a… well, horse. Maybe attractive in a ‘take his shirt off an put a bag over his head’ way, but ugh. However, The Bachelor really is a single-girl staple. And just a little addicting. But my better senses had kicked in by the time the show started, I’d decided NO. I was not going to blog about it this week. I have so much more important things to do. Like finally finish Battlestar Galactica. Or do dishes. Or, caulk my bathroom windows. No joke, I was actually caulking the bathroom window. And I can hear the show in the background. The audio alone was annoying me. As Ben is describing his time with this girl, it’s Kacie B this, Kacie B that, Kacie B is blah blah blah. Seriously, dude. Her name is KACIE. Just KACIE. If you’re in a room with another Kacie, a last initial is fine. But we all know it’s Kacie B. The caption under her picture says so. Ugh.

Anywho, there I was, caulking my bathroom window (I really am not joking), and I hear that they’re in a movie theater. And then I hear that they’re showing home videos from when Kacie was a child. And then Ben’s childhood video, of course, after they’ve made a point to remind us all that his father has died. F@*# you, Bachelor and your sweetness! Who does that? Coordinates home videos to show in a romantic, private theater? (Ok, probably the producers, but still!) Who wouldn’t fall for some floppy-haired goofy-lookin’ dude who pulls that off? Ugh. F@*# you, Bachelor for dragging me back into this crap!

So, I put down the caulking gun, pressed pause on the DVR, took a shower, and now, I’m back to blogging about The Bachelor. Ugh. I am weak.

END_OF_DOCUMENT_TOKEN_TO_BE_REPLACED

I want to start this post by letting you know that I won my Fantasy Football league this year. Yep, that’s me. Team Tankgirl. I went 10-5. Of course, most of the glory goes to Drew Brees and Maurice Jones-Drew. And I only beat Back Off Flapjacks by one point in the final game (Sorry Heather). But I need you to understand that I won my Fantasy Football League. Thank you.

Now that I have that established, on to The Bachelor. I hate The Bachelor. I hate the Bachelorette. These shows are dreadful. So much staged drama, and crazy people and a system that is so ridiculous, I can’t imagine why anyone signs up for this. Granted, there are so many reality shows that are SOOOOOOOOOOOOOO much worse. Yes, I’m talking to you all of the real housewives and Jersey shows. And this small fact is what gets me through my Monday evenings, sitting on the couch, embarrassed to be watching the Bachelor.

To pass the time, I’m gonna blog w/ you. I enjoyed doing this the final episode of DWTS with my dear Becky, so I will continue it with The Bachelor, as Becky has a one-week-old baby to take care of! I know there are a lot of Bachelor/ette recaps (Hello Giggles, Watch with Kristin, etc), but why not add another one to the mix?

END_OF_DOCUMENT_TOKEN_TO_BE_REPLACED

It seems that intricate, detailed nail polish is the new ‘thing’. I’ve been seeing this trend everywhere – from Hello Giggles to this fun DIY’er on YouTube. Even my dear friend Deb included it in her recent fashion trends post (scroll down to ‘trends I cannot abide’ – although I believe there are some exceptions there!).

While some of us have the time/energy/talent to paint snowflakes or transfer newsprint to our nails, thankfully Sally Hansen has provided easy tools for the rest of us! After seeing print ads in magazines for their Salon Effects line, I finally went to my local ULTA and found them there. I bought the pattern called ‘Cut it Out’ and went home to give it a go.

The package comes with 16 nail strips in various sizes, a nail file, a cuticle tool and instructions. I strongly suggest reading the instructions carefully. I didn’t and missed a step or two at the beginning, so the first strip took much longer than necessary.

END_OF_DOCUMENT_TOKEN_TO_BE_REPLACED

A few years ago, I somehow came across this recipe for Eggnog pie on AllRecipes.com. Since then, it has been a yearly tradition. It isn’t the easiest pie to make, but it is absolutely worth the effort!

END_OF_DOCUMENT_TOKEN_TO_BE_REPLACED

This is our first time blogging live, so bear with us! But keep tuning in for updates throughout the 1-hour episode! 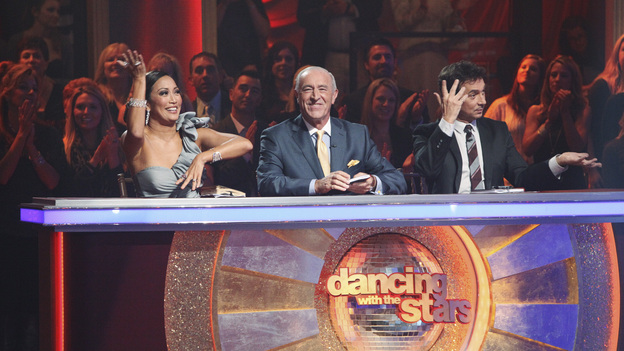 7:50pm – Lisa: Just to preface the importance of this evening. The freestyle dance nearly always determines the winner of the coveted mirror ball trophy! Whoever gets the high score tonight will likely win! This is by far my favorite show of the season!

7:53pm – Lisa:  Let’s see if I can blog and have my conf call at the same time! Becky: Oh, I am confident you can! Let’s just hope this wind storm doesn’t knock out our power! Lisa:  Ouch, good call…

7:54pm – Lisa:  Holy crap, I just saw a Kohl’s commercial set to Rebecca Black’s “Friday”. So horrible… now that damn song will be stuck in my head forever!!!!

8:04pm – Lisa: Looks like Ricki is up first! Straight to the dancing with no filler – I love it! And advice from Carrie Ann – perfect pairing I think!

8:02pm – Becky: (backing up since I’m getting texts now, but slowly) We are liiiiiiiiiiiiiiive! Our final 3 contestants are ready to go with a mixture of excitement and nerves.

8:03pm – Ricki and  Derek are up first and Carrie Ann is their mentor. (Lisa likes!) Carrie Ann told her to embrace her sexiness… and Ricki is doing great! Looks like she took it to heart

END_OF_DOCUMENT_TOKEN_TO_BE_REPLACED

This week, the dancers each performed three dances! I honestly don’t remember if that has ever happened before. The pressure was on, there were a number of injuries, the judges were uber-cranky and I think Maks has turned into a robot. 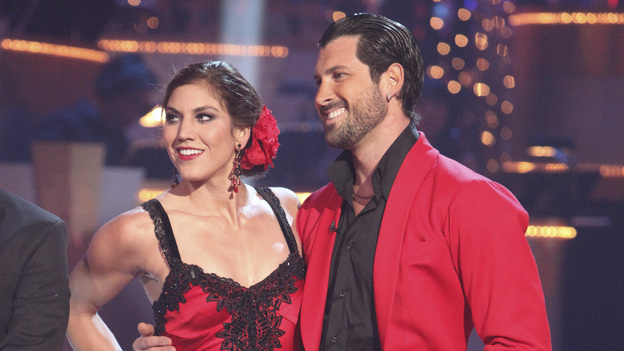 There were some very personal stories of how the contestants got to where they are today: Hope’s soccer success, Ricki’s triumph over weight issues, J.R.’s heroism, Rob’s…? Really, the only adversity Rob has had to overcome is being related to the rest of the Kardashians, am I right?

Here are the results, in order of last to first in total scores:

END_OF_DOCUMENT_TOKEN_TO_BE_REPLACED 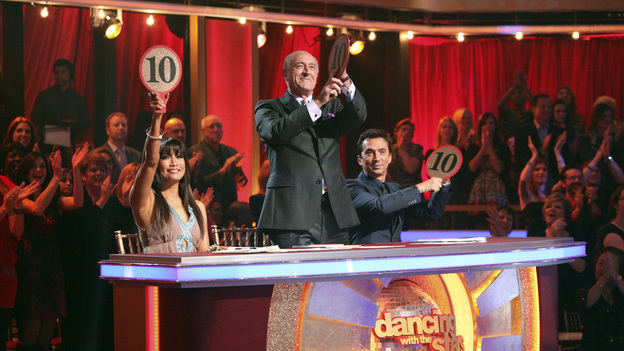 There wasn’t that much interesting about last night’s show – except for the first perfect scores! The judges were in good moods, the “celebrities” worked extra hard and their hard work showed!  Let’s get right into the scores!

END_OF_DOCUMENT_TOKEN_TO_BE_REPLACED

Happy Halloween DWTS night everyone! You know it must be some sort of “magical” night because Len is in a great mood! And the costumes were fantastic! 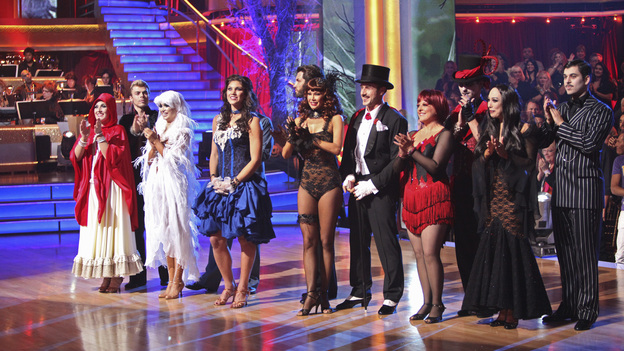 Before we start though…..

Bela Karolyi  and Nadia Comaneci vs  Maks Chmerkovskiy and Hope Solo on the dance floor anyone? Who knew he was such a rough task master?  I feel like if he were in charge of her diet and sleeping arrangements, he would have put Hope in a box and given her bread and water all week! Yikes….lighten up dude.

For example: While Chmerkovskiy and Solo were practicing with Team Paso Doble, Maks shoved the soccer player in the shoulders before frantically whipping her around. An exasperated Solo responded by saying, “Would you stop being you?” Chmerkovskiy then left the rehearsal hall, leaving teammate Derek Hough to instruct Solo instead.

And did anyone else notice the chill in the air between Maks and Hope after each time they danced? What do you guys think of Maks’ behavior during rehearsal this week?

END_OF_DOCUMENT_TOKEN_TO_BE_REPLACED

Thank you Kaela for the amazing photography. You're the best!

A big thank you to Ryan for the awesome pin curls.